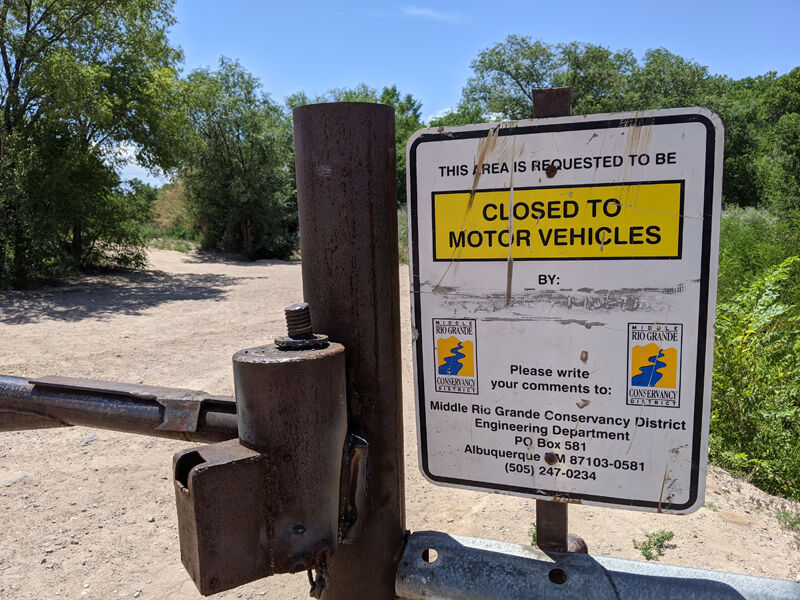 Local law enforcement will be patrolling the bosque and ditchbanks more often in an effort to help the conservancy district enforce its prohibition on motorized vehicles in those areas.

In July, the Middle Rio Grande Conservancy District announced it was suspending its bosque vehicle access permit program, and closing the levee roads and bosque river forest to all non-official motorized vehicles until further notice.

The bosque remains open for non-motorized recreation and access.

Lt. Joseph Rowland with the Valencia County Sheriff’s Office said he, along with officers from the Belen and Los Lunas police departments, met with staff from the MRGCD and were asked to help enforce the vehicle ban.

“Since (the closure) people have been cutting locks on gates, and in some cases the district has had to weld gates shut,” Rowland said. “Now people are people are cutting down trees to bypass the gates.”

Rowland said VCSO deputies on ATVs will be out patrolling the bosque this weekend, to make contact with anyone who bypasses the gates in a vehicle.

“They can be cited for criminal trespass,” he said. “People can still come in on foot; the district said they have no problem with people walking in, fishing. It’s vehicles that aren’t allowed.”

The lieutenant said the goal of the patrols is to educate people about the closure.

“The next steps would be citations and towing vehicles out if necessary,” he said. “The intent of the conservancy is to keep people aware and inform them they can’t be in the area with vehicles.”

Yasmeen Najmi, the planning specialist for the district’s biology and planning department, said this isn’t a problem just in Valencia County.

“We’ve seen a huge uptick all over,” Najmi said. “We are concerned about people’s safety; the fire danger is high and we want to protect not just our property but the community’s as well.”

Mike Hamman, the district’s chief engineer and CEO, said with the COVID-19 restrictions and closures, and so many people at home now, there’s been an unprecedented increase in visitation to the bosque throughout the district in the past three months.

“People are enjoying and taking their children to experience our precious Rio Grande bosque, in some cases for the first time. Most are walking trails and levee roads, riding bicycles or horses, fishing and enjoying the river on a hot summer day with their families,” Hamman wrote in the July press release.

“However, we’ve also witnessed and received almost daily reports from residents concerned about the large numbers of vehicles off-roading in the bosque, river and on irrigation facilities in violation of the conservancy district’s policies, as well as large gatherings, bonfires and trash left behind. We’re very concerned about the public safety risks these activities pose.”

The vehicle closure applies only to lands and facilities owned by the conservancy district in the Belen Division, from the southern boundary of Isleta Pueblo to the San Acacia Diversion Dam south of N.M. 60. This closure does not apply to pueblo, private or other state or federal lands within this river reach.