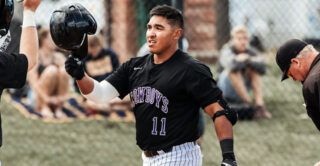 Valencia High School baseball will be led by a familiar face this upcoming spring when it returns to the diamond.

Ramirez, who went on to play at Otero Junior College and New Mexico Highlands after his graduation from VHS, spent last season as an assistant coach at Otero and was planning to return to Valencia to serve as an assistant on Carrasco’s staff anyway.

In light of the opening, he thought the head coaching position was the perfect opportunity.

“I had worked with Carrasco during the summers to help coach his club team, and was going to come back to work as one of his assistants,” Ramirez said. “I didn’t really expect the head coach position to come open so soon but I’m excited to be running it.”

Ramirez is teaching biology and chemistry at VHS virtually, but said he hopes to teach anatomy in the event that Los Lunas Schools switch to the hybrid model in January.

In college, Ramirez earned his degree in exercise and sports sciences.

As a player at VHS, Ramirez played all over, starting at shortstop during his senior season before going on to play third base at Otero.

He played for five years at Valencia, beginning with his eighth-grade year.

Having worked closely with, as well as playing for Carrasco, Ramirez said it hasn’t felt strange to him to have taken over the program from someone he has a close relationship with.

He’s spoken to Carrasco about the role some and said his former coach reminded him the program is in his hands now, and the responsibility is his to do what he feels is best in order to move the program forward and continue the tradition of the program.

The biggest change Ramirez has highlighted that he will be making to the program will be incorporating more technology and using things such as Motus bands.

Motus bands track data such as arm fatigue, speed, arm slot and other information, which Ramirez said will help prevent injuries and allow them to get athletes into game condition at the speed which is optimal based on the feedback they receive from the Motus.

His work helping Carrasco coach during the summers the past few years paid off in an important way for him after he took over the program, as it meant he already had a relationship with many of the players and was able to get right into working with them.

Because of the rearranged COVID-19 schedule, Ramirez won’t coach his first game in charge of the program until April, giving him plenty of time to work with the players beforehand.

With a young team, he said he thinks this may benefit them as it gives them about two months of extra time to work on throwing programs as well as strength and conditioning in order to get them as ready as possible for the new season.

In last year’s shortened season, the Jaguars were out to a 5-3 start before the season shut down.