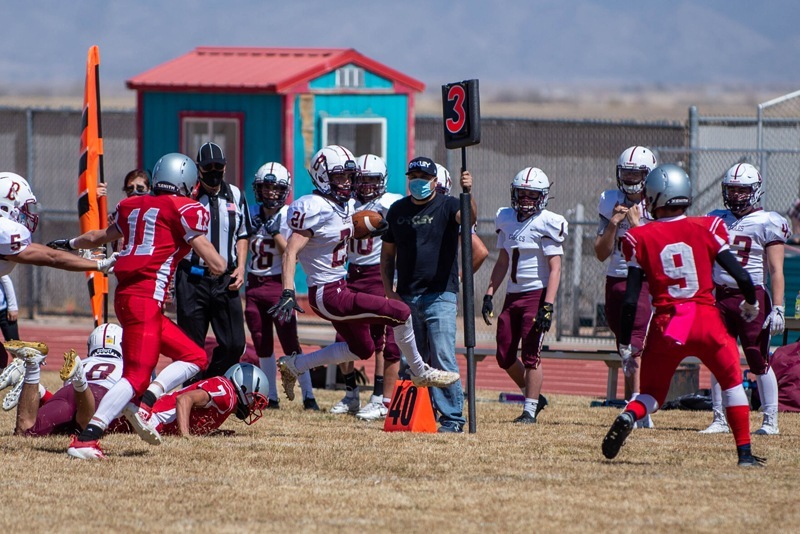 The Belen Eagles returned to the football field in a big way on Saturday, crushing the Valencia Jaguars 50-0 in a game that was ended late in the third quarter on the mercy rule.

On a sunny afternoon at Valencia, it was the Eagles defense which led the team, stifling any offensive momentum the Jaguars had.

“They played really well, they tackled well, they were in the right spots. It was very impressive from our defensive kids and the staff as well.”

In less than three quarters of play, VHS was only able to cross midfield once, and that came on a 15-yard penalty on the defense.

“It’s just so great to be back out here again,” House said. “It’s been a very long road, but every opportunity we’ve had to work out, these kids have shown up.

“For all the trials and triumphs, they were still there. The kids and the parents kept fighting for this. Getting this game in is very rewarding for everyone involved.”

It was the first time the Jaguars played since Nov. 1, 2019, in a home win over Valley.

The game was sloppy on both sides, with plenty of penalty flags to go around.

“We were expecting it to be sloppy,” House said. “I sat down with my staff a week or two ago and we pretty much said ‘take it with a grain of salt.’

“We just need to clean it up from here.” 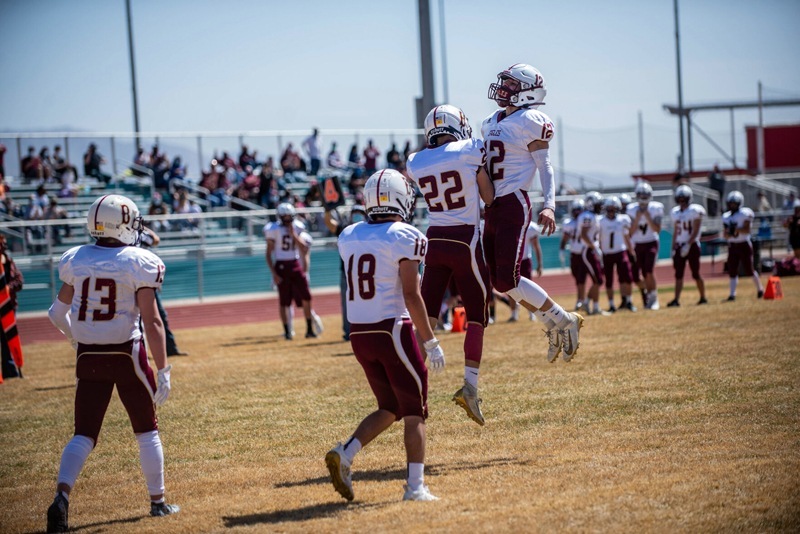 Early on, neither side was able to generate much offense, with an Anthony Roybal touchdown the only points scored in the first quarter, giving Belen a 6-0 lead after one.

It was in the second quarter that the Eagles offense roared to life as they rattled off 30 points before halftime to take a 36-0 lead into the break and ensure the second half kicked off with a running clock.

The first touchdown of the second quarter came almost immediately, as Belen quarterback Ben Hirschfeld connected with Emmanuel Aragon in the end zone to put the Eagles up 14-0 after a successful two-point conversion.

Roybal scored his second of the day to make it 20-0 with 5:36 to play in the second quarter.

The Eagles would score twice more before the end of the quarter, capped off by a Hirschfeld pass to Elijah Romero which made the score 36-0 as time expired in the first half.

All of this success for the Eagles came while the team ran a limited playbook. House and his staff sat down and selected which packages they wanted to go with to start the season in an effort to help clean things up for the game.

In the second half, it was more of the same story for the Eagles. After VHS received the kickoff and went three and out, BHS got the ball back and immediately got back on the board as Hirschfeld connected with Aragon again for a long touchdown pass.

Additionally, a 15-yard unsportsmanlike conduct penalty was called on Adriano Ortiz for Valencia, which allowed Belen to kick off from the 45.

Aragon was singled out by his head coach for his performance on the day, finishing with three touchdowns.

House also pointed to the performances of Romero, Roybal and Hirschfeld on the offensive side of the ball to help the Eagles get the win.

“I thought the way the kids played as a whole was impressive, that’s the main thing that sticks out to me,” House said.

Next week, Belen will host its first game of the year with the Highland Hornets slated to visit BHS on Saturday at 1 p.m.

The Hornets are 0-1 on the year after falling to Valley High School 8-0 last Friday night.

Valencia will face another tough task next game as the Jaguars are on the road against the Los Lunas Tigers at 1 p.m., Saturday, March 27. 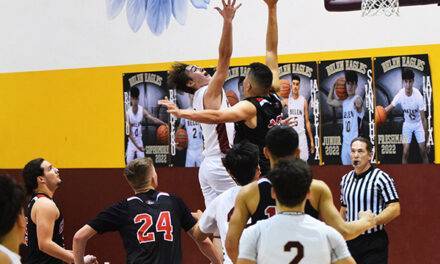