BELEN — The call came in while he was working in his garden, and initially Jerry Baca, a deacon at Our Lady of Belen Catholic Church, thought it was a prank call.

“When it finally sank in, that’s when I knew St. Teresa of Calcutta was walking the streets of Belen,” Baca said. “Her spirit is alive and booming in our community.”

The call was from Megan Dunn Davidson, chief impact officer for the United Way of New Mexico. The nonprofit organization was offering the St. Teresa of Calcutta Soup and Blessing Kitchen $1,000 a week to feed Valencia County families.

The soup kitchen was organized in December 2018 by Baca and OLB parishioner Mario Baldonado; the two men wanted to provide meals to not only those who are homeless but those who are lonely.

UWCNM is a 501c3 nonprofit that serves Valencia, Bernalillo, Sandoval and Torrance counties. The organization raises money for and provides support to nonprofits in the four-county area.

“This really came from one of our long-time donor families that’s been really involved in United Way — how to make sure families are being fed during COVID-19,” Davidson said.

The family made the first donation to the Feeding Families Fund, and as of Friday, May 1, $166,768 has been raised for the fund.

United Way identified seven nonprofits throughout the counties, Davidson said, and asked them to submit a plan and cost estimates of how they would like to feed local families. 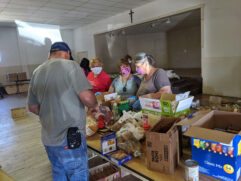 Volunteers with the St. Teresa of Calcutta Soup and Blessing Kitchen pack up food boxes to distribute with the meals the organization purchase each week through a United Way of Central New Mexico grant.
Julia M. Dendinger | News-Bulletin photo

When United Way awarded the funds, the only request it had was the agencies make purchases through an independently-owned restaurant or food truck or a local franchise.

“That’s our only ask,” she said. “They could purchase a plated meal or gift cards that families can use on their own.”

The various agencies received different amounts of funding, depending on how they planned to use the money. The domestic violence shelter in Rio Rancho, Haven House, for instance, decided to provide their 15 families with three meals a day, Davidson said.

“The nonprofits submitted their costs and estimations and were awarded different amounts based on the service they were able to offer,” she said.

So far the St. Teresa of Calcutta soup kitchen has purchased meals from Pete’s Cafe and the Road Runner Pit Stop. This week, the meals will be from Rutilio’s.

“This is a total blessing from our Lord, our Father,” Baca said.

The meals will be distributed throughout Valencia County, Baca said.

Facebook has also reached out to Baca and the soup kitchen, he said, and has committed to the same level of funding for the group for 10 to 15 weeks after United Way funding is done, he said. The company has also donated $800 to the kitchen for pots and pans and utensils when it’s back up and serving.

Baca said the soup kitchen couldn’t continue to operate on a take-out basis due to the extra cost of containers.

All praise for the success of the soup kitchen and the Feeding Families program goes to the volunteers and Our Lady of Belen’s pastor, Father Clement Niggel, Baca said.

“He’s our leader and supports the kitchen. All the people, the volunteers, they are the ones that actually make this happen,” he said.

To decide who to deliver meals to, Baca said he and his volunteers turned to their faith community and have reached to the school districts to find families in need of a meal.

Last week, they distributed 120 meals on Friday plus a box of food to make meals on the weekend.

Niggel said having a soup kitchen has been a dream of his for many years, so when Baca and Baldonado came to him with the proposal and offered to serve the meals at the Knights of Columbus hall, it was ideal.

“What we are doing here is only one small part of something huge,” Niggel said.

Area churches, such as First Assembly of God and Calvary Chapel Rio Grande Valley, have been working with nonprofits like the Roadrunner Food Bank and their own members to increase the amount of food they can distribute, while others are giving out toiletries and personal hygiene items to those who need them.

Peggy Garcia, a volunteer with the St. Teresa of Calcutta Soup and Blessing Kitchen carries to-go meals from the Road Runner Pit Stop to a waiting car last week. The kitchen was awarded $1,000 a week by the United Way of Central New Mexico to purchase meals from local, independently owned restaurants to distribute to Valencia County families.
Julia M. Dendinger | News-Bulletin photo

“We are all joining together as one to serve how we can and as many as we can,” he said. “It’s beautiful to see.”

However, by the time the truck was ready, the COVID-19 public health emergency was well underway and the two didn’t think it was wise to launch the business. Instead they took the charitable part of their business plan and started it instead.

“Our idea was to be for-profit Monday through Thursday and then do something for charity on Friday,” Siegman said.

A member of Our Lady of Belen and volunteer at the soup kitchen, Siegman said helping out with meal distribution for the United Way project was a natural fit.

“We were already looking for things like this to help out with,” McNeil said. “We are just trying to do as much as we can for as long as this lasts.”

The truck will be parked at Ladyhawk Feed and Supplies, 800 S. Main St., Belen, on Friday afternoons for as long as the soup kitchen is doing meal distributions.

They will have a couple dozen meals on hand while other soup kitchen volunteers distribute the rest to people’s homes.

Davidson said UWCNM has enough funding to support all seven agencies through July 1.

“For us, it’s really to support our local non-profits. That’s what United Way does,” she said. “It’s been really great seeing collaboration between local restaurants and non-profits.”

Davidson said she is in the process of applying for a grant to continue funding the program and hopefully increase the agencies serving meals.