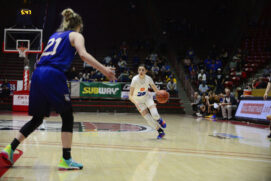 Guest has been interested in Colorado Christian since she was a sophomore, when she took an initial visit to see the campus.
News-Bulletin file photo

Los Lunas basketball star Mia Guest has committed to play for Colorado Christian University, which is located in Aurora, Colo. and is a division two school which plays in the Rocky Mountain Athletic Conference.

Guest, who is a student at Canon Christian Academy in Belen, starts in the backcourt alongside Jojola for the Tigers, who last year won their third consecutive state championship.

She also considered Biola University in California, but CCU was the school she was most interested in.

“I was supposed to go to one of their camps over the summer, but it was canceled due to COVID,” she said. “That was the only other one that the coach was kind of interested in me but I wasn’t in contact with a lot of other coaches, mainly just Colorado Christian.”

She took a visit during her sophomore summer to see the campus for the first time and was able to meet the coaches and has kept in touch with them since then.

“My sophomore year we went to look at the campus, and my parents set up a meet the coaches kind of thing, so I was able to meet coach Carissa Ratliff, the assistant coach, she said we would keep in contact,” Guest said.

“Over this past summer I was supposed to go to one of their camps, but due to COVID it got canceled so we just tried to do as much as we could online — we would email every week and text each other highlight films that I made and let them know new stuff that was going on.”

When she applied to the school and was accepted, the coaches invited her to come on her official visit to the school, where the university covers related expenses for the trip to campus.

“I went to kind of like a tryout I guess, and then after I flew home we had a zoom meeting and they made me an offer, and I took it,” Guest said.

Given the uncertainty surrounding the upcoming season, which is scheduled to begin on Jan. 4, 2021, Guest said she was relieved to be done with the recruiting process and know where she’ll be playing college basketball.

“Especially with not knowing how this season is going to play out, its reassuring,” Guest said. “It feels like a weight has been lifted off of me.”

Colorado Christian is led by head coach Corey Laster, assisted by Ratliff, and went 10-18 last season, with a record of 10-12 in conference play.

Guest said the conference is typically dominated by guard play, which, as a guard, she is excited about. 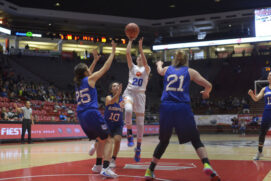 “I’m hoping that they play fast paced, up and down, that’s what I’m hoping for, a lot of penetration and kicks, not so much give it to the post and let them go to work,” Guest said.

Going in, she’s prepared for a fight for playing time.

“I know for sure that I’m going to have to work my way up, depending on if they get a season they may be able to keep all their students and they’ll get to play another year,” Guest said. “They said that I should be a real key player in their program, and hopefully I can make a difference.”

So far, despite having a final destination in the same conference as two of her teammates, there hasn’t been much trash talk yet, she said, but she is sure it’s coming.

“It’s pretty cool how it worked out,” Guest said. “Not yet, right now we’re just excited that even though we won’t be on the same team anymore, we will still be connected through the conference. I’m sure we’ll get pretty feisty once we start playing.”

In the meantime, Guest has been working out with her brother, Ezra, a sophomore on the LLHS boys team, hitting the weights and working on her three point shot.

“Lately I’ve just been trying to dial in my three point shot,” Guest said. “When their coaches saw me at the tryout they told me I really needed to work on my perimeter game so I’ve been trying to master that, my three pointer, stepbacks and double moves, stuff like that.”

Before she leaves Los Lunas, Guest wants to win a fourth straight state title, something she knows will be a challenge playing in class 5A, but a challenge she and the rest of her teammates are ready for. 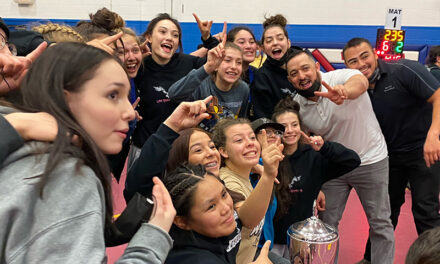