BELEN — Three schools in the Belen Consolidated Schools district will soon be getting $1.2 million in security system upgrades.

On a unanimous vote, the Belen Board of Education approved a contract with Albuquerque-based APIC Solutions for security system upgrades to Belen High, Central Elementary and La Merced Elementary schools.

APIC Solutions CEO Jesse Pickard said the contract was offered under Cooperative Educational Services, the state’s purchasing cooperative for school districts, and would give the schools a more proactive system.

“In managing today’s challenges, it’s no longer acceptable to have a system that is only used reactively. You need tools to be proactive,” Pickard said. “How do we know who’s coming to our schools? How do we keep an eye on thousands of students? How do we stay connected and keep people informed? How can we provide eyes on a scene from anywhere?”

The APIC system uses artificial intelligence and learning to monitor what happens on a campus, and create alerts based on unusual activity.

“It doesn’t know what is happening but the system is smart enough to know something is unusual and alert the designated people,” he said.

The system has the ability to accelerate investigations of on-campus incidents — such as a fight — in real time, Pickard said, by identifying a person’s face then having the system search footage of people coming in and out of the facility, showing where they went.

“That is important for response times. How quickly can you locate this person and remove them from campus?” he said.

The AI software will also be able to “learn” what typical activity is like on a campus around the clock.

“From a proactive standpoint, the system has the ability to look at what is going on and determine, ‘Is this typical?’ For instance, you have a parking lot at night and no one is typically there. There’s activity there, maybe it’s someone from the maintenance department. The system isn’t smart enough to know intent, but it knows that activity is not typical and someone needs look at it,” Pickard said.

The system also includes upgraded video quality to assist in prosecution, he said.

“So often you see poor quality video and can’t identify faces,” the CEO said. “There is also an appearance search tool that can identify objects.

The APIC system can be set to detect unusual motion, gatherings of people in unauthorized locations on campus, such as behind buildings and in mechanical areas, Pickard said.

“It can ID these activities and generate an alert so staff can try to prevent an escalation,” he said. “We can’t cover every square inch of a school and still be good stewards of taxpayer dollars but this will sufficiently cover schools.”

BCS Superintendent Lawrence Sanchez said the district would be piloting a sensor and software that detects vaping in bathrooms. Both he and Pickard emphasized there wouldn’t be any recording equipment in bathrooms.

“These are sensors, not cameras. They will not be recording. They will integrate with the system and send alerts,” Pickard said. “We recognize the difference between privacy, and security and life safety. To protect students’ and staffs’, it’s about finding the right tools.”

The system can lock all the doors in a building, if the correct locking hardware is installed, Pickard told the board, and video back ups will be not be the property of APIC.

“The data is yours and yours alone,” he said. “Everything is permission based so you can keep really tight control of the video.”

The money for the system will come from general obligation bonds. 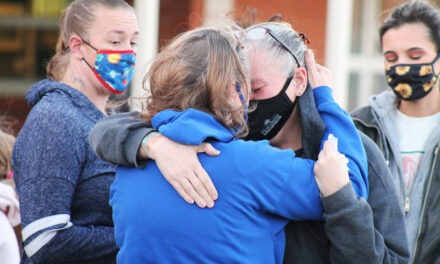