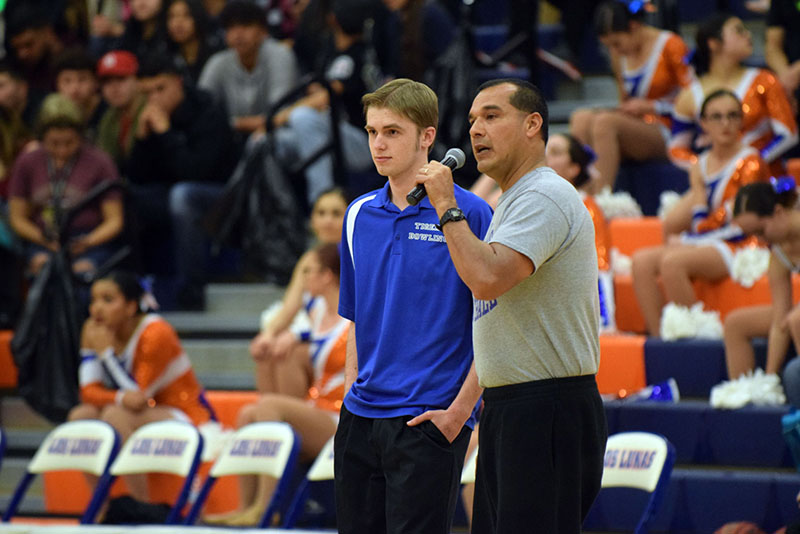 Los Lunas High School junior Justin Hackney made history this season as he became the first Tiger to bowl a perfect game.

“Honestly, I didn’t notice anybody was watching through the tenth frame,” Hackney said of the moment his point total reached 300. “I was aware (of the score), but I just didn’t want to let it get to my head.”

Hackney, who has been bowling at Los Lunas since eighth grade, is no stranger to high-pressure situations. In his first season with the Tigers, they brought home a state title. At the 2019 State Tournament, they placed seventh. Head coach Tony Jaramillo said Hackney has proven himself to be a strong, quiet leader. During halftime of the Los Lunas vs. Belen boys basketball game, Jaramillo recognized Hackney for his efforts over the years, particularly the perfect score Hackney tallied.

Hackney’s bowling roots don’t begin at Los Lunas. Rather, they go back to his early childhood. His mother, Jackie, bowled with her sisters growing up in Belen. It was his grandmother, Rita Danner, who introduced him to bowling when he was four years old. By the time he was six, he and Danner were bowling on a doubles team at the International Family Tournament in Baton Rouge, La.

“He bowled in a youth league,” said Jackie. “It was something to do on Saturdays.”

As Hackney got older, his skill improved. He took lessons from Paul Yoder at Yoder’s Pro Shop at Holiday Bowl. He eventually joined Los Lunas’ bowling squad as a middle-schooler. Now, Hackney bowls three or four times a week. Though he tried other sports, bowling was the only one he enjoyed.

“I don’t like almost every single other sport,” said Hackney. “Bowling has proven to be one where I’ve succeed the most.”

That enjoyment helped Hackney work hard to improve in bowling. Jaramillo said his work ethic and dependability make him worthy of all the recognition he gets for his perfect game. His accomplishments this past season have led to an invitation to the Youth National Tournament in Detroit.

Hackney credits Yoder, his grandmother, mother and coaches for his success.

“I would also want to thank my team for being there throughout the season,” said Hackney. “And Coach Jaramillo and Coach (Charles) Orris.”

Jackie Hackney couldn’t have been more happy for her son.

“It was exciting,” Jackie said of the perfect game. “I was never so proud. For him to be able to do that in front of all of these people (at the tournament) — it was so exciting.”