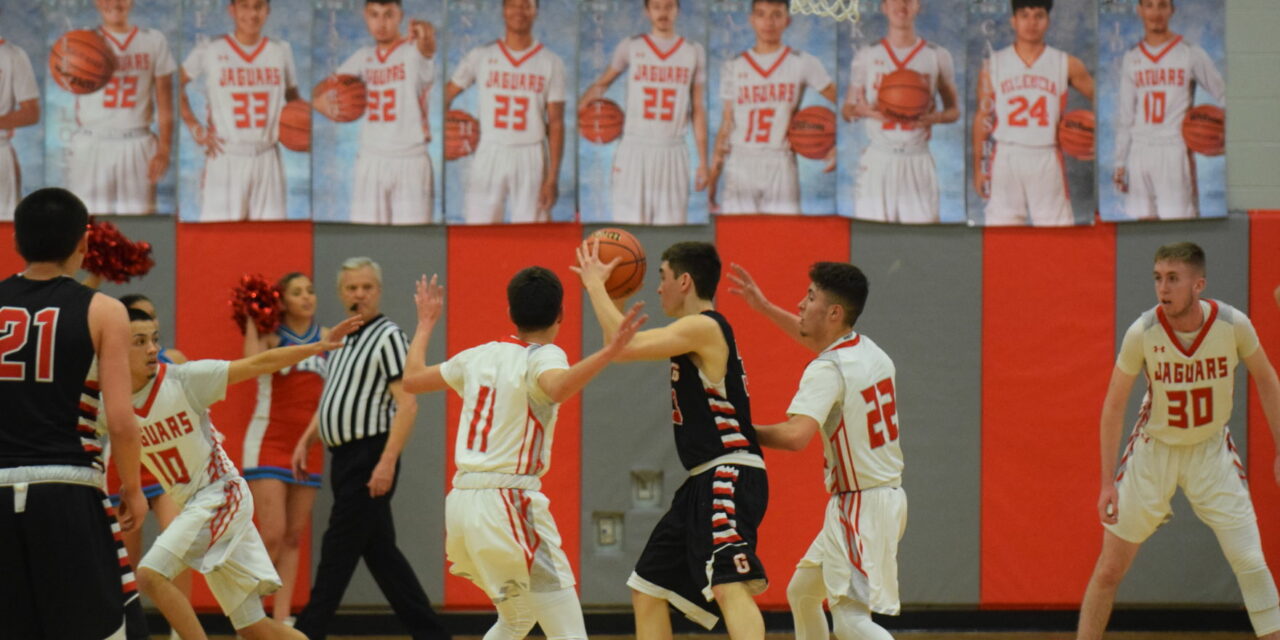 Valencia kept their undefeated district record alive with a 56-52 home win over Grants on Tuesday evening.

The Jaguars (14-7, 3-0) began the game strong, outscoring the visiting Pirates 17-4 in the first quarter. Led by 13 first half points from senior Alex Lopez, the Jaguars had a 31-17 lead at halftime.

Lopez finished the game with 15 points.

“(Lopez) is one of those that can get hot in a hurry and he did tonight,” said Valencia head coach Joshua Mattox. “He propelled us and gave us a cushion in the second half.”

Grants put together a comeback in the second half. Led by sophomore Nick Trujillo’s 14 points, the Pirates gave the Jaguars a scare.

“(Grants) went into a zone in the second half and that threw off our rhythm,” said Coach Mattox. “I told our guys at halftime that it would come down to us finishing plays and making sure we took care of business when we needed to.”

Late in the fourth quarter, the score was 47-46. However, Valencia junior Jake Mattox hit a clutch three-pointer to stretch Valencia’s lead to 50-46.

“(Mattox) has been good in the clutch,” said Coach Mattox. “He takes care of the ball and does the things we need him to do.”

Grants brought the game within 2 points late in the final minute, but Valencia senior Jason Rodriguez and Jake Mattox didn’t miss any of their late-game free-throws and put the game out of reach.

A recently released coaches’ poll placed Valencia as the sixth-best team in 4A New Mexico basketball.

Valencia’s next game will be at home against Los Lunas at 7 p.m. next Wednesday.

Los Lunas (16-3, 2-0) picked up a road win on Tuesday evening with a 68-44 victory over St. Pius. In a recent coaches’ poll, the Tigers were voted as the top team in 4A New Mexico basketball.

Los Lunas’ next game will be at Grants at 7 p.m. Saturday.

Belen did not play on Tuesday evening. The Eagles’ next game will be at home when they host Silver at 7 p.m. Thursday.