I’d have to say I’m not exactly the opera type. The extent of my experience with opera doesn’t range much beyond listening to “Bohemian Rhapsody” by Queen over and over again in my youth. The opera is for the opulent, I thought, not the bourgeoisie like me. It just isn’t my cup of tea.

But when I had the chance to go to the Santa Fe Opera to see “La Traviata,” I jumped at it.

The Santa Fe Opera hits a footnote in my relationship with my wife, Lisa. When I first met her, she had this brass key chain that was a souvenir from the SFO. She had seen “La Traviata” there some years before and loved it. Learning that the opera was a cultural experience I had never enjoyed (and unaware that it was the sort of thing I knew I could never enjoy) she promised me she’d take me there sometime. I reluctantly agreed.

More than a dozen years later, the opportunity presented itself. The SFO sent its press kit for the 2002 season to our offices at the News-Bulletin. Our editor, Sandy Battin, asked if anybody on our staff wanted to go. Knowing that my wife, at least, would like it if I took her, I grudgingly volunteered.

I took the packet home with me and let Lisa pick which of the five operas playing at SFO this year she would like to see. Having thoroughly enjoyed it once before, she picked Verdi’s “La Traviata,” a sad story of love lost that takes place in France and is sung in Italian.

I didn’t care what we’d see; it was all Greek to me. And I was pretty sure I wasn’t going to like it anyway. This was pretty much just something to make the wife happy — you know how it is — and fulfill a promise I made long ago.

So the dreaded day, Aug. 16, rolls around and off we go to spend a night at the opera. An hour before the show we pull onto the winding road that leads through the trees and up to the beautifully styled structure. My first vision of it is painted with a striking background of a New Mexican sunset. Magnifico!

We park the car and start walking toward the front gate. Along the way, we notice several small groups of people sitting at makeshift dinner tables. Some were enjoying finger food and had a glass of wine in hand. Others were having full-course meals with their mauve.

“I didn’t know they had tailgate parties for the opera,” I said to my wife. “Maybe this isn’t such a bad thing after all,” I said to myself.

We pick up the tickets and we’re in the opera house. From the patio, we can see the stage through an aisle entrance. It is decorated for the first act, which takes place at a party hosted by the lovely Violetta Valery. Once again, the backdrop is a gorgeous sunset over the Jemez Mountains in the distance, becoming more beautiful by the minute.

We had to make a quick stop in the gift shop to try to find a replacement key chain for the one my wife lost years ago. Alas, there was nothing as cheap as brass in the store. She settled on a poster as her souvenir from the opera this year. As soon as we get a frame, it’ll be hanging on our bedroom wall, a reminder of our night at the opera.

“Would you like a glass of wine, dear?” I asked my wife. She declined. I decided I needed a cup of coffee if I was going to keep from dosing off during the show.

It was a perfect evening. The warmth of the day had worn off. A mild breeze kept things cool in the open-air auditorium, which, since my wife last attended, had been covered to prevent rains from showering on the show. We spent the next 45 minutes taking in the breathtaking colors at the end of the day, exploring the grounds and partaking in one of our favorite pastimes — people watching.

I thought the opera was a formal event, but that wasn’t necessarily the case. At least not in Santa Fe. Remember, this is the City Different.

The extremes ranged from men in tuxes and top hats to blue jeans and boots. There were women dressed to the gills and others who wore garments with no fancy frills. It seemed the opera, at least in Santa Fe, is as formal as you like it to be.

The lights flickered, announcing that everyone should take their seats; the show was about to start. We found our seats — $80 seats 10 rows behind the orchestra pit on the aisle — and settled in for “La Traviata.”

The seats were comfortable, which was important since the performance was to last nearly three hours. Three intermissions were scheduled, allowing everyone to stretch their legs.

In front of each seat is a device that displays the opera titles — in your choice of English or Spanish — so patrons can understand what they are singing about. The program, provided free of charge, recounted the story. I made a practice of reading the synopsis of each act beforehand so I would know what was going on.

The lights go down for the final time and performance begins. The cast is dressed in splendid costumes circa 1850, about the time Verdi penned the score.

Violetta, whose part is sung by Madeline Bender who was making her SFO debut, is hosting a party for her friends. She is introduced for the first time to Alfredo, performed by Raymond Very, who confesses he has admired her from afar for a year. But, as it turns out, she already has a suitor — the Baron (Ethan Watermeier).

When the agitated Baron refuses a request to make a toast, Alfredo rescues the moment and leads everyone in a song.

Afterwards, Violetta finds herself torn. She promised herself she would never fall in love again, but she can’t dismiss her attraction to Alfredo.

Somewhere between Acts 1 and 2, Violetta and Alfredo end up living happily together in a modest country home. Until Alfredo’s father, Germont, shows up on the scene and asks Violetta to break up her relationship because, for some reason, it jeopardizes his daughter’s upcoming marriage. Violetta, who is suffering from health problems of an unknown nature, decides to sacrifice her love for Alfredo and returns to her life as a courtesan.

Alfredo is out of town, so is unaware of the request his father has made. Violetta writes Alfredo a note that says she is returning to the Baron. Alfredo vows revenge.

Act IV takes place in Violetta’s bedroom. She is mortally ill now. Alfredo, who survived the duel, leaving the Baron wounded, rushes to her side and they declare their mutual love. Alfredo bellows about how they will resume their love affair in Paris, but Violetta is barely hanging on. She offers one last burst of virtuoso before she collapses and dies.

Applause, applause. Everyone, including me, enjoyed the performance. Some people even thought it deserving of a standing ovation.

The cast and conductor, John Crosby, took their bows. Bender got a nice hand for hitting the high notes. I don’t know much about opera singing, but, evidently, William Andrew Stuckey, who sang the part of Germont, was pretty good. He appeared to get the most applause and somebody even yelled out “Bravo!” He was either good or a bunch of his college buddies were in the crowd.

All in all, I must confess it was a pretty good show. I only caught myself nodding off once near the end just before Violetta’s big finish, and I experienced the opera — Santa Fe style — for the first time.

So Bravo, SFO. You showed me the opera can be a fun experience for a guy like me. You can tailgate. You don’t have to dress in tails. You can follow along with want’s going on, even though you can’t understand the words.

Most importantly, you helped me score points with the wife. It was a great date.

(Editor’s note: T.S. Last is the sports editor of the Valencia County News-Bulletin.)

Young man gets opportunity of a lifetime 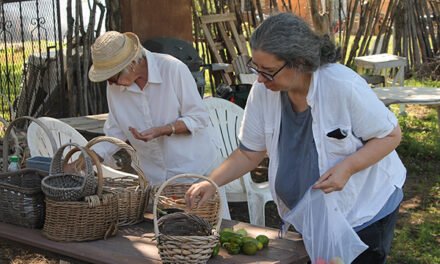 Yard and Garden: Getting ready to winterize your gardens