An Auge Boy & His Garden 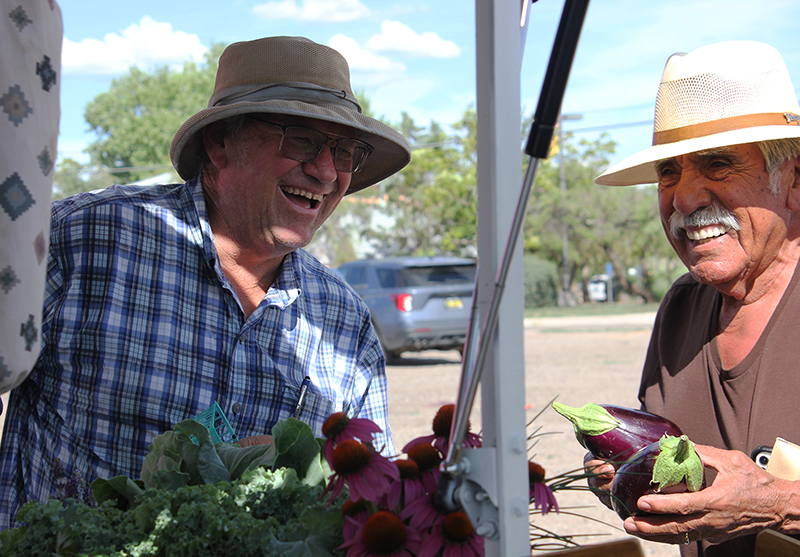 Robert Auge smiles and jokes with a customer at his Auge Farms farmers market booth in Los Lunas.

From purple eggplants and yellow squash to bright orange carrots and the greenest of beans.

Every week, Robert Auge lays out the week’s harvest in neatly organized and labeled bins on a repurposed horse trailer to sell at local farmers markets.

Even after 15 years, Auge still greets every customer with a big smile and a contagious laugh.

“It’s more (about) the quality of food you get, not only for your own family but that you are able to share with other people,” Auge says. “It just gives you a great sense of satisfaction to take a seed and get something from it.”

He began growing his own food in the 1970s — shortly after he married his wife, Nelda. He was inspired by his “old-time gardener” father-in-law, who enjoyed growing his food for most of his life, coming of age in the era of the Great Depression and the Dust Bowl era.

“There is a lot to be said for canning, preserving, growing your own food, because a lot of his upbringing was in Vaughn, (N.M.), and there was no Walmart in Vaughn,” Auge said with a chuckle. “And when you live in that kind of environment that they had in those years, you’ll learn lots of tricks. The old-timers can teach us a whole lot of things if we just paid attention.”

After a short break from gardening and growing, Auge said he and Nelda got back into it and began selling their excess at local farmers markets, following the recession of 2008 to pad their retirement fund.

“We got back into it too so that we would have a good source of food — preserving, canning, freezing — and it’s really paid off,” Auge said. “You have things to eat when the stores are empty.” 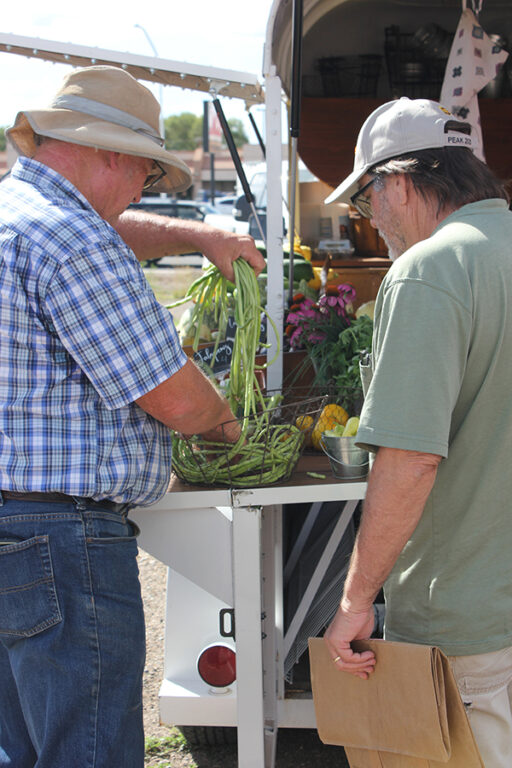 Robert Auge shows off his long green beans to a potential customer at his farmers market booth in Los Lunas, where he has been selling his excess fruits and vegetables for about 15 years. 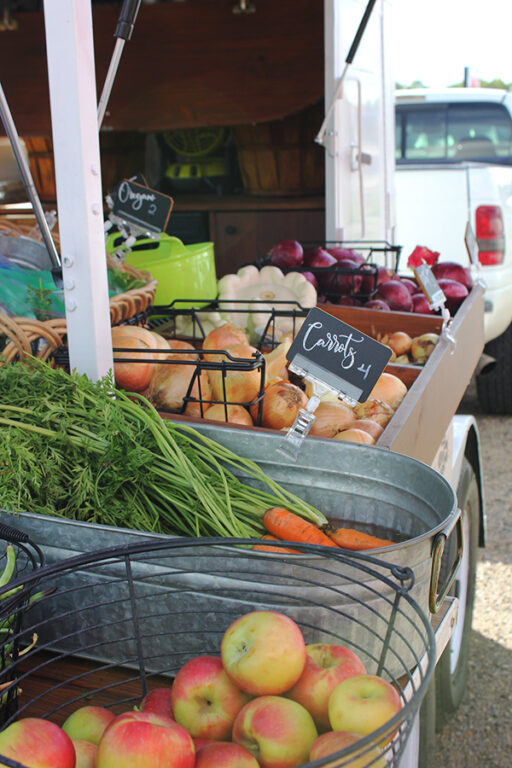 Fruits and vegetables in all shapes and sizes color the sides of a repurposed horse trailer from which Robert Auge sells rainbow of offerings.

In the past 15 years or so, Auge has noticed a resurgence of those “old-time” preservation techniques practiced popularized during times of economic hardships, integrated with newer technologies, such as freezing and dehydration.

Today, he and Nelda grow their cornucopia of offerings on a quarter-acre plot in Tomé with their son and daughter-in-law, Tim and Susan, also contributing what they grow in their smaller garden in Los Lunas.

“You don’t really need a tremendous area to grow a lot of stuff,” Auge said. “It’s not about how many acres you’ve got, it’s how efficient.

“We grow stuff on trellises, we try not to grow things that take a tremendous amount of land area,” he said.

Tim and Susan’s garden is a “model of efficiency,” producing up to 300 pounds of vegetables every week on about 6,000 square feet of land. They received recognition for their efforts in 2020, being named the August “Garden of the Week” by the Valencia County Extension Master Gardeners.

“He gets a very good production out of the area because of the way he has it structured, has it taken care of and because of the way he waters it,” Auge said. “It’s not much bigger than a large house … It’s not like you have to have half of Valencia County to do this; just gotta do it right.” 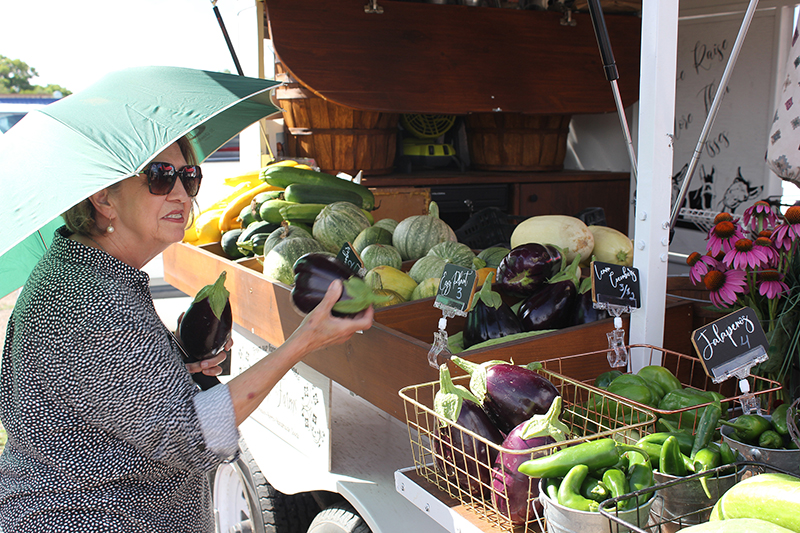 A visitor at the Los Lunas Farmers Market, which is held every Tuesday during the summer at the Valencia Y, considers buying several eggplants grown by Auge Farms. 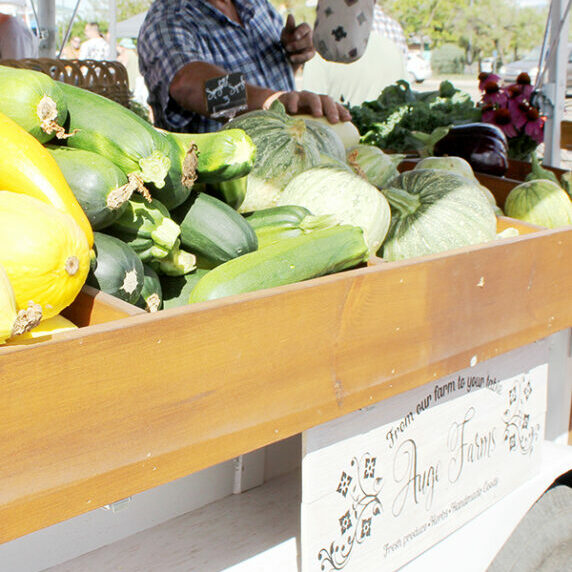 Robert Auge was inspired to begin growing his own food by his “old-time gardener” father-in-law.

Auge said gardening has been a great side-gig, but advised newbies to not bite off more than they can chew.

“If you’re looking for something that is a hobby, that’s fun and keeps you from sitting and watching TV all day long, gardening is a great way to do it,” he said. “Yeah, you get some weeds, yeah you get some bugs, yeah you get a few other things out of it, but the rewards of having something good to eat when nobody else does is not a bad idea.”

While jumping into the deep end sounds fun in theory, Auge recommends new gardeners to start off with hardy root vegetables like beets and radishes. He said those vegetables grow well in the dry, New Mexico climate, and don’t require a large amount of space to get a lot of reward.

This contrasts corn, which needs a lot of space to get a usable yield, Auge says.

“Corn is one of those products that takes a tremendous land area to grow. Growing corn is a great idea, but it’s not one of those things that’s the easiest thing to accomplish in our area,” he said. “Go out there and plant your corn and when you only get four ears out of it, you’re going to be disappointed.”

No matter what people decide to grow, he advised new gardeners to not get discouraged, and to try and try again.

“I just tell people don’t give up,” Auge says. “Maybe your green beans didn’t come up this week, but you can put a couple more seeds in the ground and maybe they’ll be back next week.” 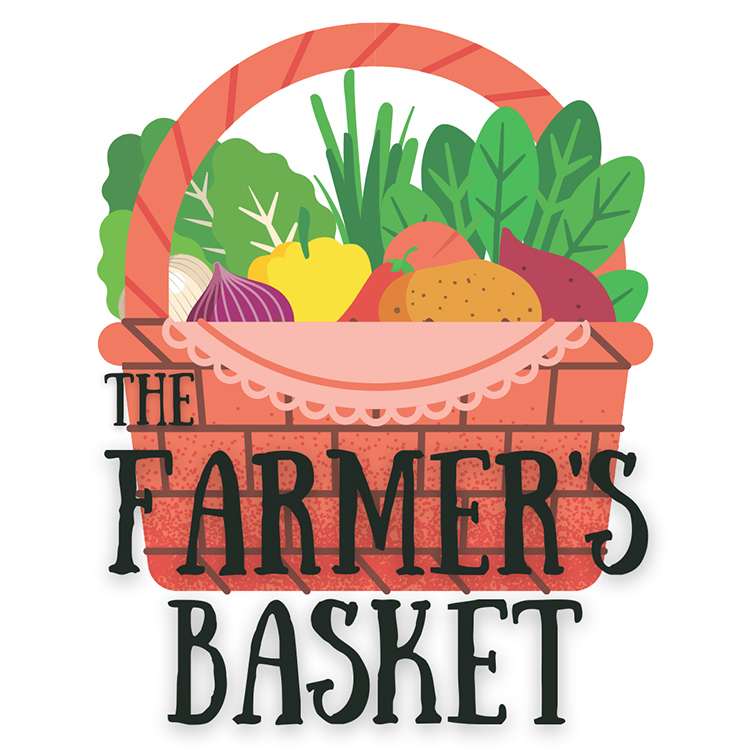 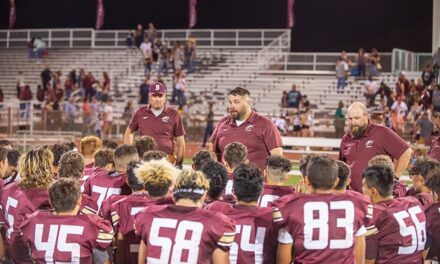 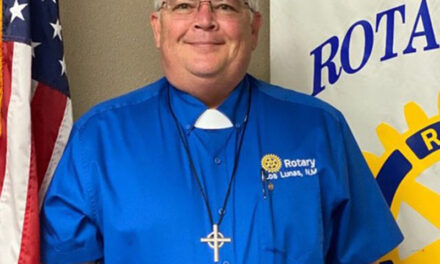