It was the first game his team played since the 38-year-old Sedillo died in his sleep early Sunday morning.

“This was the team that he strived to beat,” said Sedillo’s wife, Trish, of the South Valley squad. “They beat him twice during the season, and he was confident that his girls had it in them to win.”

Zeke knew his team could beat South Valley because they did it once. After losing two games to South Valley during the regular season, the girls from Los Lunas avenged the losses by beating South Valley en route to winning the New Mexico “Tournament of Champions,” a post-season tournament for league winners throughout the state.

The rivalry between South Valley and Enchantment is a friendly one. Several of the players from South Valley played on the Chile Peppers, an ASA team Sedillo also coached. After the scheduled game between the two teams was rained out on Wednesday at Albuquerque’s Zia Little League diamonds, the teams paid tribute to the coach by getting together and releasing balloons into the rain-filled skies.

Earlier this month, Zeke was quoted in the News-Bulletin as saying his team would win the District 5 tournament and advance to play for the state title. “We’re going to take first,” he said. “I’m pretty confident.”

In his last game as their coach last Saturday, Zeke coached the team to an 18-1 win over Mile High in the tournament opener.

Trish said her husband was a humorous, loving and caring man. He believed in his kids and believed they could achieve whatever they set out to do.

“This is what Zeke would have wanted — for them to finish and to play,” Trish said. “He told them they were good enough to make it to the (Little League) World Series.”

The Enchantment majors are still on track for a World Series run. If Enchantment wins its 9 a.m. game on Saturday against either South Valley or Westgate at Zia, it will advance to the state tournament.

In Zeke’s absence, the team will be coached by Nacho Elizondo and Frank Aragon. But no one can really replace Zeke.

“He meant a lot to that league,” said Glenn Trujillo, Los Lunas High School’s head softball coach who coached Sedillo’s daughter, Amanda, on two Enchantment state championship teams the past two years. “He was dedicated to softball in Los Lunas. He did a good job of promoting it. He will be missed.”

Trish said the girls on the team loved their coach, and Zeke loved them. On Thursday, all the girls wore wristbands with “Zeke” written on them.

“He has worked so hard for those girls, and they respect him, and the parents respect him. Those girls really loved him. They were all kind of like his own kids,” she said.

The Sedillos have three girls playing in the District 5 all-star Tournament — Arielle, who plays on the 9-10 division all-star team coached by Trish; Amy, who was coached by her father on the minor division team; and Amanda, who plays for Enchantment’s senior all-stars.

Despite the loss of their father, Trish said all the girls wanted to finish out the tournament. “They know that’s what their dad would want,” she said. 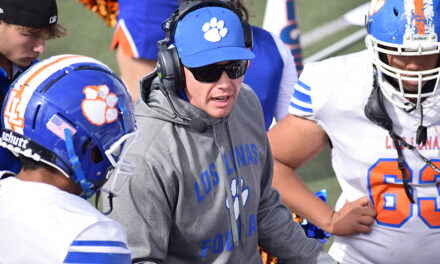