County grants director, Jeremias Silva, said all ARPA funds allocated to the county have to be obligated by the end of 2024 and projects had to be completed by the end of 2026. The act was signed into law in March 2021, and provides money to state and local agencies to respond to the COVID-19 public health emergency or its negative economic impact in a variety of ways.

Since the firefighter positions are for emergency services, the funds can be used for salaries, Silva told the commissioners. 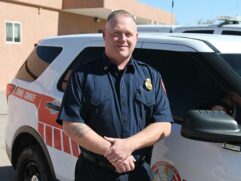 “The intent is to staff El Cerro Mission, Tomé and Los Chavez stations to provide 24/7 coverage out of three stations instead of the one we have now,” Propp told the commissioners. “This will make a huge impact on our community. (The ARPA funding is) a way to accommodate a rapid staff increase and budget for the future.”

In the past year, the county fire department has seen a 49.4 percent increase in incidents, the chief said, compared to the national average increase of 13 to 17 percent.

“Our crews are working out of one station, taking 30 to 35 calls in a 48-hour shift,” he said. “If you look at call times and if they have to transport, we have crews not sleeping for two days. It’s taking a toll on their mental health.”

With three stations staffed full-time, the number of calls per shift for each crew will be reduced, giving them more time to train and rest, Propp said, and “providing better service by ensuring 24/7 calls out of three fire stations.”

Propp attributed the huge increase in calls to several things. Access to health care within the community is harder than other areas, which increases wait times at and transportation times to Albuquerque hospitals, he said, as well as the misperception that dispatch is there to answer medical questions.

“People will ask us to check vitals, confirm they have a fever, do they have COVID,” the chief said. “Even something basic like a lift assist, where someone has fallen and they can’t get back up. Sometimes their only means of help is 911, but we have to get them up, check their vitals, make sure they’re OK. Also, we’re just seeing more people coming into our community, so of course we’ll see an increase in calls.”

Commissioner David Hyder asked with the increased calls, how many were being missed by the department. Propp said the number of missed calls was fairly low, but response times were high.

“For instance, last week we had a crew cleared off a fire call that went straight to a medical call. We didn’t have a transport capable unit at the time and AMR was unavailable,” the chief said. “We had another call pending so a neighboring jurisdiction transported, but there was still a 30 to 45 minute delay. From the stand point of the fire chief, I don’t accept that.”

Other ARPA projects the commission approved included $690,680 for software enhancements to create a more robust public records system; $30,000 to upgrade the HVAC system, install UV lights and remove carpeting in the county treasurer’s office to promote clean air; $200,000 for an emergency management office and storage building for the county fire department; $784,256 for a shortfall in design services for parks and recreation; and $19,998 for streaming recruitment advertising for the Valencia County Sheriff’s Office.

VCSO Undersheriff Jeff Noah said the department would use the funding to create three recruitment videos, which would be featured on several of NBC’s streaming services. Noah said the videos would be targeted to subscribers in Valencia, Socorro, Sandoval, Bernalillo and Santa Fe counties.

“I believe they guaranteed 500,000 views over four months,” the undersheriff said. “We also get to keep the videos and use them as our own promotional materials. We can’t use them on other streaming services, but we could put them on our website and Facebook page.”

The commissioners rejected one ARPA project — a request for a $400,000 small business grant by H2 Academic Solutions. While the county has distributed more than $100,000 ARPA-funded grants to small businesses and nonprofits in the unincorporated parts of the county, Silva said several applicants from incorporated areas have been turned away. H2 is based in the city of Belen.

Silva noted other jurisdictions which received ARPA funds had the choice to use some of it for small business grants like the county did, but weren’t obligated to.

While the commissioners agreed H2s proposal for an alternate education site was a positive for the community, funding its request after turning away others from local municipalities would be unfair.

“I think the grant request is a good thing, but to (Commissioner David) Hyder’s point, to give a grant to a business in the city when others have been turned away isn’t fair,” said Commissioner Troy Richardson. “We would be happy to look for other money — H2 is a great cause — but I don’t think this is the money.”

Richardson made the motion to approve the proposed ARPA projects except for the one from H2. Hyder made the second and the commissioners voted 4-0 in favor. Commissioner Jhonathan Aragon wasn’t at the meeting.

In other business, the commission unanimously approved: